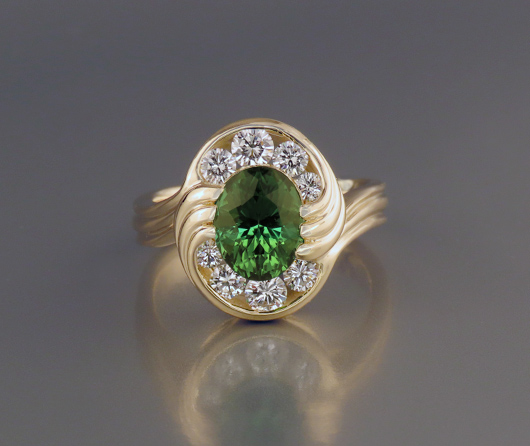 Ring Style: A Cottage by the Sea I Dreamed a Beach
In Tourmaline and Brilliant Waves
Of Curling, Frothing Diamonds

I was born to a white sand beach in Maine. Three generations of my people came before me to these shores. I celebrate their wisdom. As a child, I conjured up sea serpents beneath the waves. Just beyond our cottage’s sand dunes and sea grass, pirates buried treasure in the sands. Two tides arrived each day carrying with them driftwood and deep wisdom for foreign shores.

My years on this Maine beach were the best of times and the best of years. It was, and still is a great time to live in. I am grateful to the people who came before me who have allowed me this opportunity to sit by the sea and watch the sunlight sparkle on the waters and the bay out beyond.

A Cottage by the Sea
Green Maine Tourmaline & Diamond Ring

This is the rush of water. These are the tides and waves as they sweep in, carrying the treasures of the sea.

A tourmaline mined in Maine’s western mountains is at the center. It sits at the high tide mark, surrounded by a golden sea blessed by the summer light of July and August. This is the rise, the crest, the sweep of natural energy, a living celebration of your time at the sea shore. Diamonds, yes, this is the diamond light on the water glittering out across the bay.

A Cottage by the Sea welcomes you home.

A White Sand Beach and the Open Blue Atlantic

Out front was a white sand beach, and the open blue Atlantic. If you sailed in a straight line south you’d hit the Dominican Republic in the Caribbean. Out back we had a 16 foot sailboat on a tidal river and a ten acre saltwater marsh. The marsh grass was green all summer and turned yellow in the fall. On three sides of our cottage we had sand dunes higher than a 7 year old, with beach grass that grew naturally. This was so long ago there were no signs that said, “Keep Off the Sand Dunes” to prevent erosion.

As a new baby, I listened to the call of sea gulls and tried to eat beach sand. Life at the beach was good. At one year old I had two loving parents, a beach, a boat and the entire Atlantic Ocean at my front door. On one of my first overnights, I remember waking to full sun and a dew-laden bike and car. Everything was wet with beaded dew and there on the car was a clear sandy set of gull prints across the roof. Later, following the sand path to the beach, the breakfast club of fifty to sixty herring gulls was assembled on a stretch of white sand, some sitting, most standing.

The tide was high, waves coming ashore as I came to the end of the path. I know I am their threat. I can hear their primal calls. I can hear their guttural staccato, and the long, drawn out single notes. I feel the sound in my chest and forearms. When they see me, the sitters get up. They walk. They look over their shoulders, look once, keep walking, look twice and keep walking. Then one takes flight, then three. Then seven are scooting, and then a hundred wings are flashing gray and white in the early morning light.

Since this new discovery, we’ve created an amazing collection of SparHawk tourmaline jewelry. This is an exciting time in Maine history. We show many of our SparHawk pieces of jewelry online.