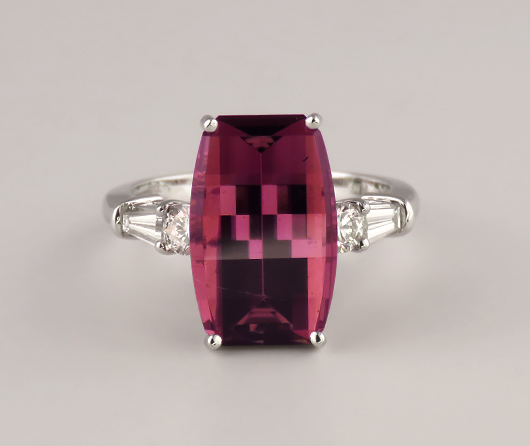 This is an exceedingly rare gem. More than likely the only large pink Maine Tourmaline ever cut in the twilight style. The crystal was discovered on Plumbago Mountain in Newry, Maine in 1972 and cut by Sean Sweeney in 2016. The twilight cut is a jewelry cubist delight…crisp, bright, angular flashes of pink-burgundy light traveling up and down the length of the gem. Set in Platinum with two round-cut diamonds and two tapered baguettes in a ring style we call “Kennebunkport”. All Platinum, hand-made mounting.

This gem has a curious history. Originally cut as a long, shallow oval with a brownish peach color. It was mounted in a yellow gold ring with accent diamonds. The ring was traded by the original Maine gem miner for a leather couch. It was held for 40 years, never worn, then came back on the market. We purchased the ring, removed the tourmaline and had it recut in the twilight style. Interestingly, the brownish peach color went away, leaving a lovely pink color. We chose to mount this twilight-cut gem into our Kennebunkport ring, all platinum with two round Ideal-cut diamonds and two tapered diamond baguettes. This ring is likely to be the largest pink twilight-cut gem ever to come from the 1972 gem find on Plumbago Mountain.

This is a Trip

Through the Light Fantastic