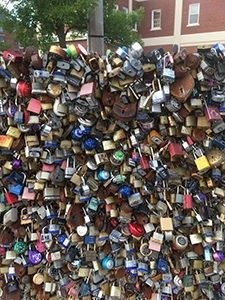 We had a jeweled Love Lock last year with a big blue natural earth-mined sapphire. It was beautiful. We had just one. That would be like having a bridge over a river and saying we have one spot for one lock on the bridge. Yes, we got some feedback on our one sapphire. Comments like, “Would you ever consider…” “If you ever…” “It would be nice if…”

Big beautiful cushion-cut sapphires of exactly the right size. Impossible, absolutely impossible. Then one more sapphire just happened along. We said why not and designed another Love Lock mounting to fit. We got smart this time and made a master lock for other gems, other colors. Our favorite, a genuine Maine gem from our newest currently active mine – SparHawk mint-green-teal Maine tourmaline, bright, brilliant, from the Western mountains of Maine. The gem is cut right here in Maine by Sean Sweeney of Bar Harbor. And because SparHawk is an active mine, we can cut more.

The SparHawk tourmaline mine is 28 miles north of our store. Mount Washington, New England’s tallest mountain, is 58 miles west of the mine. The gem mine is located in Poland, Maine in the foot hills of the White Mountains. One hundred-ten years ago tourmaline was first discovered here in a farmer’s field. The discovery was so significant it made national headlines. After a year of mining then nothing, nothing, nothing. Nothing for 100 years, until a young guy came along with faith and vision, bought the property, started mining and as they say, “the rest is history.”

Currently the SparHawk mine in Maine is the most significant find of tourmaline in the world. What they are finding are minty green crystals that when cut possess a vibrant spring green color. The color plant leaves have when they first emerge from the earth. There is a freshness of new life of spring in each of our SparHawk gems.

Mined in Poland, Maine, cut by Sean Sweeney of Bar Harbor, Maine, SparHawk gems are designed and set into fine jewelry at our shops in Portland and Gray, Maine. Our three primary signature cuts are oval, cushion, and our new twilight cut that possesses a non-stop twinkle and glitter of light that will entertain you, your children, and grandchildren for generations to come.

What this gem and its color will do for you. It connects or re-connects you to God-given life, new beginnings, new start. It is the natural color of spring. Just to wear a SparHawk is a breath of fresh air, it’s a drink of clear mountain spring water. Poland Spring Water is the water at the grocery store with a green label. The original Poland Spring Company was founded in Poland, Maine and is just 5 miles away from the SparHawk mine.

The SparHawk mine is just a tiny spot on planet earth, 200 feet by 200 feet, a dot on the map, of highly enriched, rare mineral elements that have formed tourmaline crystals in pink and blue, but mostly in green. The green color found is a shade rarely seen. The SparHawk crystal has a blueish tint in one direction and a glowing green in the other direction. Gems, when cut, come out as we call it “mint green teal”. I love Sweeney’s cuts. He’s the best gem cutter in America. His gems hold an otherworldly brilliance. Stephen and I sat and talked with Sean one day as he cut a large SparHawk crystal. We watched from early morning until after the son went down. We saw the cutting and polishing every step of the way. He’s so good I swear I saw him cut a bigger gem from the crystal than the crystal should ever have allowed. The gem was an historic piece, a 27 carat oval. Its buyer was a museum.