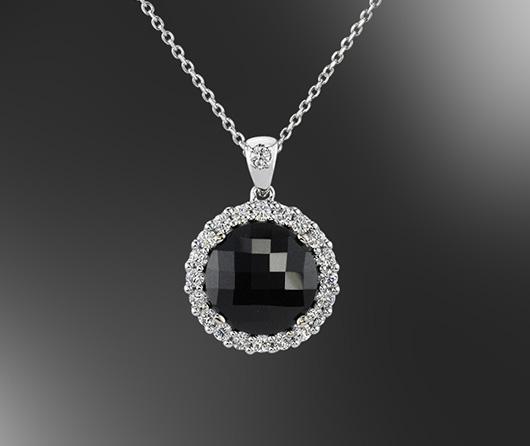 I wish it was easy. I’ve only been there twice, once by helicopter, once with a lobsterman and his wife. It took me ten years of trying to figure out how to get to this island. The island is remote. The island is mystery. The island’s situation is such that it will remain unnamed so we’re giving it a special name, “Black Star Island”. You won’t find “Black Star” on the charts. It’s a diamond in the rough.

I’ve talked with other people who have been. When they relate their stories they have mist in their eyes, many choke up because of what they saw and what they did and how they felt when they were on the island. Island children are told bedtime stories about this island. It’s magic is spoken of in foreign lands. I was surprised, I’ve talked with people outside of America who knew about “Black Star”.

We have a black stone from this island, which we then faceted a series of cut stones with a checkerboard top. It glitters with white light dancing across the black surface of each stone…these stones are mysterious and dazzling.

If you knew nothing of this story and just saw the necklace being worn…you would say it was beautiful, because it is beautiful. Clasp it around her neck, the black gem center is 12mm round and weighs over three carats. The twinkling full halo of white diamond stars surrounding the big black star center adds to the frame of brilliance, for high drama.

It’s important to know the piece is simply beautiful, even if you didn’t know that the black star is imbued with magic and mystery and that the gem comes from an island of legend and dreams. This is Like a
Total Eclipse of the Sun

At first it almost seemed unbelievable – “black diamond” from Maine, the coast, an island. Black, sparkly, brilliant flashes of white light. Makes a statement. Real black diamond? No, of course not! The effect though, remarkably similar. Surrounded with natural white diamonds. Some Have Said This is The Eclipse of the Sun

This is elegant, the moon blackening the sun. The corona surrounding, shining through like diamond light reflecting on a sun dappled sea. Black stone from a mysterious island off the coast of Maine…rising high, rising suddenly from the sea. An island reputed to make grown men roll on the beach and play like kids. Grown men, men skittering down the beach rocks rolling like marbles beneath their feet, grown men running and sliding on the rocks like kids on ice. I’ve been there. I’ve seen it. The island is like a fountain of youth. The island works its mysterious powers on men.

I’ve seen women on the island too. Only one, once. She seemed pleased to be there, but she kept her wits about her. Maybe, if I saw more women on the island I’d see more kid-like behavior among them. Guys, though, just cut loose. I’ve never seen anything like it. If they filmed an episode of survivor out there, I can’t imagine what would happen.

I’ve been there twice. No details specifically with whom or much about what happened except it took me 10 years of trying to finally make it out the first time. The island is made up of dense black rock that takes an amazing polish when cut like a gem. Initially, we acquired several sample rocks from an island family in the ocean neighborhood. Everyone raves about the mystical properties of the island. From this one first rock we cut 36 gems. We made several “Black Star Island” necklaces and sold them quickly. We’re looking forward to creating more of these exotic “Black Star Island” necklaces.

This “Black Star Island” necklace is elegant and a Goldilocks-perfect size. Not too big, not too small, just an ideal size for any black-tie soirée. Wear it to the Christmas party; wear it for New Year’s Eve, and yes – wear it to a school board meeting. Why not? The world needs some additional touches of elegance. We’ve attempted to have the stone identified. Each time it has come back labeled with geology jargon – essentially unknown, adding to the mystery. We’ve never found a stone anywhere on the coast of Maine like it. So, we cherish it. It’s hard, tough, durable, ideal for pendants and earrings. It accepts a great polish. The checkerboard facets capture the contrast of white on black making this one of the most elegant pieces of jewelry we have ever created.

Cross designs, makes, and creates most all of our jewelry. The results are hundreds of designs that exist in our store and nowhere else in the world. Our “Black Star Island” necklace is one of our awesome exclusive designs, and while we sell all over America, the odds are that in your lifetime you’re not likely to ever see another “Black Star Island” necklace – unless there are two of you on the school board.