When You Wish Upon A Star Diamond Necklace - Cross Jewelers 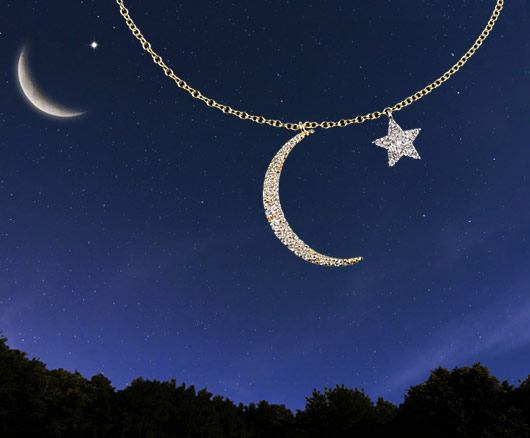 Name: When You Wish Upon A Star Watching the Moon and Stars

This is the house at night. I’m a moon watcher and a night sky watcher. The house has a wraparound porch from which one can see the night sky in all directions. After the sun goes down I step out to the railing several times an evening to look at the moon and the stars. I know they will be fine without my nightly monitoring; I just like to watch them sail across the night sky. When You Wish Upon a Star
Diamond Necklace

Star light, star bright,
First star I see tonight,
I wish I may, I wish I might,
Have this wish I wish tonight.

Romantic crescent moon and first star. The first star is special, though, for all the billions of wishes that have been made and granted. How many wishes have you made?

With candles, you don’t have time to think. Someone yells, “Make a wish!” and you do. Then another year goes by. With stars you get a fresh shot almost every night.

My Daughter and I

My daughter and I walk the dog each evening. Winter is especially awesome. Stars are out at dog walking time. As we walk we discuss our day. The words are good, conversations the best. Stars are brighter in the winter. I always feel so lucky to make a wish on the first star.   – P.M.C. We were kids on our Maine Island. Tar roads most places, no street lights, and skies filled with stars. After supper we would walk with mom and dad and the dog. We walked everywhere.

And later, years later we walked with island kids and Island Stars, spruce trees up above, stars twinkling through, dark roads…stars. Docks and stars. Boats and stars. Stars and kids were the best. A Maine Island and endless time; it was awesome to be a summer kid. “Second Star to the Right And
Straight on Until Morning,”

Peter Pan says shortly after leaping out of the window with Wendy and her brothers in the Disney movie.

A slip of moon and a star second to the right. Sprinkle a bit of pixie dust and hold on to the magic of youth for one more night. Disney captured the last moments of youth in Peter Pan so perfectly. Looking for evidence? Consider how hard it was to let go of Santa at Christmas or the bunny at Easter. In truth we all, at times, resist growing up. Second Star is eternal youth.

When You Wish Upon a Star

Makes no difference who you are. And, although you didn’t land a part in a Hollywood movie, it was because Disney never made a casting call to you, but you know, you know, you know how very special you are. The sun, the moon and stars were called on your behalf. Here we deliver two magnificent moments of the early morning sky, the crescent moon and Venus hanging in the morning twilight.

All great Hollywood stars get a star on Wiltshire. You get 49 diamonds set in gold of course. Moon & star suspended on an adjustable chain 16”,17”, 18” length. In the summer I spend most of my weekend days outdoors with sun screen and a baseball cap. Toward the end of the day, I come in for supper, to catch the news, rest, have a glass of red wine, bread warmed in the microwave with dipping cheese. And then, with twilight, I’m back out again.

Normal people, I realize, don’t do that after twilight. There is, however, a good two hours to the day after dark that most miss. I roam around in my yard watching the night sky, the moon, and the stars.

For several years I had a six inch deep reflecting pool on my oak terrace. I would sit at the edge beneath the oak tree on the stone stairs that led down to the pool and watch the moon’s reflections in the pool and starlight twinkling.

After my years of night pool watching, I have to content myself with watching moonlight on the water off-shore. There is a vast ocean stretching 20 miles out to the southeast. There’s a lot to be said for the night sky before midnight. Do you know the whole Twinkle,
Twinkle Little Star poem?

Twinkle, twinkle, little star,
How I wonder what you are.
Up above the world so high,
Like a diamond in the sky.

When the blazing sun is gone,
When he nothing shines upon,
Then you show your little light,
Twinkle, twinkle, all the night.

Then the traveler in the dark,
Thanks you for your tiny spark,
He could not see which way to go,
If you did not twinkle so.

In the dark blue sky you keep,
And often through my curtains peep,
For you never shut your eye,
“Till the sun is in the sky.

As your bright and tiny spark,
Lights the traveler in the dark.
Though I know not what you are,
Twinkle, twinkle, little star.

Twinkle, twinkle, little star.
How I wonder what you are.
Up above the world so high,
Like a diamond in the sky.